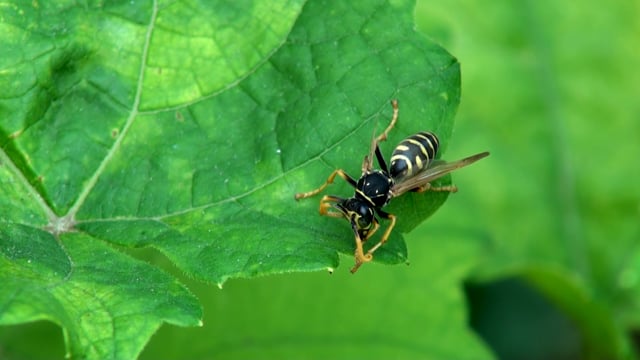 Utah is home to a wide variety of wasps, and if you’re a nature enthusiast or have a pest problem, you’ll want to learn more about these fascinating creatures. From paper wasps to mud daubers, each species of wasp plays an important role in Utah’s ecosystem. In this blog post, we’ll explore the different types of wasps in Utah, their habitats, and how to identify and deal with wasps. So, if you’re ready to learn more about wasps in Utah, let’s dive right in!

If you need professional pest help in the Wasatch Front, Uinta Pest Services is here to help. Contact us today for a free quote.

Introduction to Wasps in Utah

Wasps are interesting, complex creatures that you’ll find in many parts of the world. In Utah, there are several different species of wasps, and they play an important role in the local ecosystem. Wasps are predatory insects that feed on other insects, spiders, and other pests, which helps to keep the population of these pests in check. Although wasps can be intimidating, they’re also beneficial to have around and can help to keep your home and garden pest-free.

Types of Wasps in Utah

There are numerous types of wasps in Utah, but the most common ones are paper wasps, mud daubers, European hornets, and yellow jackets. Paper wasps are the most common type of wasp found in the state, and they build nests in sheltered areas, such as under the eaves of houses or in shrubs and trees. Mud daubers are also common in Utah and they create mud nests that are often found on the sides of buildings. European hornets are larger than other wasps and they’re identified by their yellow and black striped bodies. Finally, yellow jackets are also common in Utah and they’re identified by a brighter yellow and black bodies.

Wasps in Utah can be found in a variety of habitats, from rural areas to urban ones. Paper wasps are often found in wooded areas, such as forests and wooded yards, while mud daubers are found in open spaces, such as gardens and fields. European hornets prefer to make their nests in trees, while yellow jackets are often found on the ground, such as in grassy areas or near pools. Wasps can also be found in man-made structures, such as sheds, barns, and garages.

Wasps are an important part of Utah’s ecosystem and they help to keep the population of other pests, such as flies and mosquitoes, in check. Wasps also help to pollinate flowers and other plants, as well as provide food for other animals, such as birds. These prickly critters are a key part of the food chain and their populations should be monitored and protected to ensure that the ecosystem remains healthy.

That said, don’t feel bad if you need to take care of a wasp infestation at home. There are no government protections towards the wasps mentioned in this article, and are still considered a pest amongst agricultural communities. If you have a wasp problem, don’t feel ashamed to call a pest control professional to help.

Did you know that some wasps in Utah can live for up to two years? This is because wasps have the ability to hibernate during the winter and emerge in the spring, ready to start a new colony. Wasps can also fly up to 25 miles per hour and can sting multiple times without dying, unlike their cuter cousins in the bee family. Finally, wasps have an amazing sense of smell and can detect food sources up to five miles away, if the wind is right!

How to Identify Wasps in Utah

How to Prevent Wasps in Utah

The best way to prevent wasps in Utah is to keep them away from your home by sealing off any potential nest sites. Make sure to check your home for any cracks or crevices that could be used as nest sites and seal them off with caulk or other materials. You should also avoid leaving food or sweet drinks outside, as this can attract wasps.

How to Treat Wasps in Utah

If you find a wasp nest on your property, the best course of action is to call a professional pest control service. They will be able to safely and effectively remove the nest and treat the area to ensure that the wasps don’t return. It’s also important to take preventive measures to keep wasps away from your home.

For all of your pest control needs in the Wasatch Front Area, call Uinta Pest Services.

Wasps are fascinating creatures that play an important role in the local ecosystem. There are several different types of wasps in Utah, each of which has different habitats and behaviors. It’s important to understand the different types of wasps in Utah and to take preventive measures to keep them away from your home. If you have a wasp problem, it’s best to call a professional pest control service to safely and effectively remove the nest and treat the area. With this knowledge, you’ll be able to better appreciate the amazing variety of wasps in Utah!